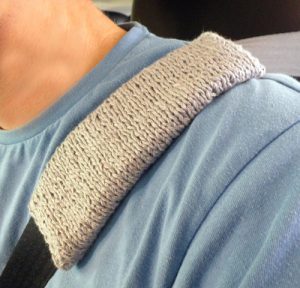 The cover-seatbelt avoids the hassle of the belt on the neck and shoulder. The belt cut, itches and makes you sweat especially in the summer (the period when you do long trips in the car …). It is also dirty and ugly ….! The cover belt is mixed linen and cotton in order to be fresh and soft. And when you put off their seatbelt, it scrolls automatically in the band, so dont have to enter the strip every time and you can leave it in the car already put. When it’s time to take it off to wash it, just open the strap fastener. Also it can be decorated as you like by changing the color or inserting embroidery and applications. 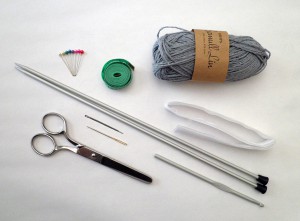 ABOUT MEASUREMENTS The width of 15.5 cm/6.1 in is calculated for a width of the standard seatbelt of 5 cm/2 in and 2 cm/0.8 in of velcro. So it is neither too wide (it would slip down) nor too tight (so the belt would not flow through the belt in the engagement and disengagement operation).

ABOUT YARN SELECTION A mixed cotton-line yarn (in this case Drops Bomull-Lin) was chosen to balance skin’s bitterness and freshness, especially in the summer. For the winter, beacause the seatbelt cover is not directly in contact with the skin, a softer yarn can be chosen to better cushion the bumps and strut.

ABOUT COLOR SELECTION: Here is a neutral gray, but other colors can be used, especially clear for the summer. Black is unlikely because this risk mimicking too much with the seatbelt and making it less useful. Combinations such as chess (recall to the flag of motor racing) or white and red (for maximum visibility) can also be used. It is better to avoid phosphorescent or too glossy colors, to avoid “dazzling” those who look at you from the rearview mirror! 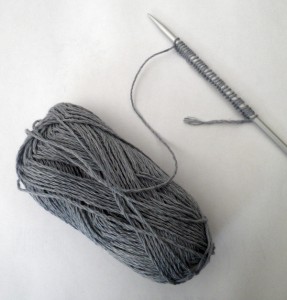 1) Cast on 34 stitches and work in stockinette stitch (alternate a knit row with a purl row). To obtein the chain selvedge (good to be crocheted) use the following procedure: in the right side rows slip first and last stitch, in the wrong side rows purl all the stitches. 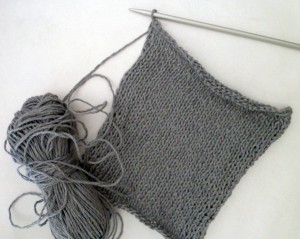 2) After 38 rows, bind off all the stitches except the last one; do not cut the thread at the end. 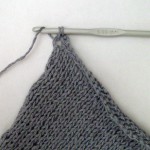 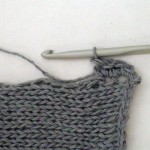 3) Remove the needle from the remaining stitch and replace it with the crochet, then hook it in the first chain of the edge (to the left of the last stitch binded off) and work single crochet (U.S)/ double crochet (U.K) until the end of the border. This processing smooths and strengthens the edge. As the chains on this side will be particularly wide, if necessary, work twice for each chain. At the end of the edge cut the thread. 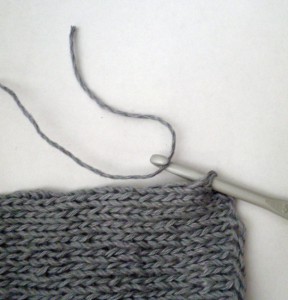 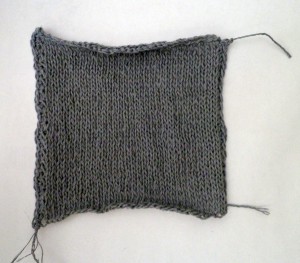 5) Cut the thread and weave in ends. Stretch or push with a weight to facilitate the application of velcro. 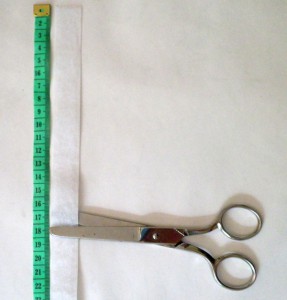 6) Cut a 17 cm/6.7 in velcro strap, both soft and crinkly, and spin the corners with the scissor (so they do not ruin the thread and do not sag into the skin when using the seat belt) 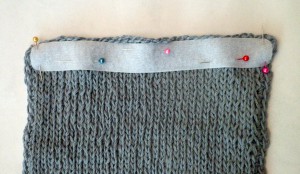 7) First fix the soft side of the velcro (to prevent the crinkly velcro spoil the yarn during processing) along the edge formed by the start row, covering the right side of the work. It is important to fasten the velcro along the horizontal edge of the work (and therefore perpendicular to the strips formed by the stockinette stitch in the right side of the work) because it will withstand more to the sharp edge of the seat belt. To fasten the ribbon, first place two pins on the short sides (leaving 2-3 mm/0.1 in free on the three sides) and then center to the long sides to uniform the work tension (keep in mind that the starting side is generally Longer than the finishing one, but need to be uniformed to 17 cm/6.7 in each) 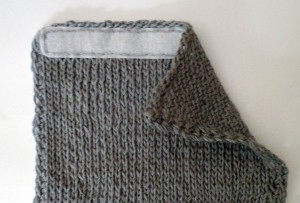 8) Sew with sewing needle; To mimic the seam, you can use a thread to pull it off from the one used to knit 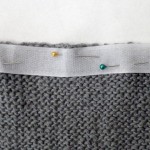 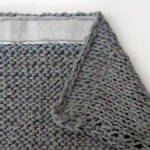 9) Repeat for the crinkly part of the Velcro, to be fixed on the back of the work, along the edge formed by the last knitting row (parallel to the strips formed by the purl knits). Before sewing the second ribbon, make sure you match the first one. 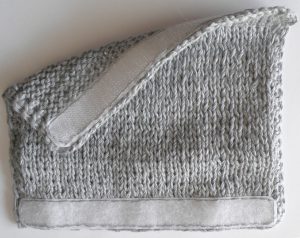 Cioci 3.0 (How I hacked Decathlon) 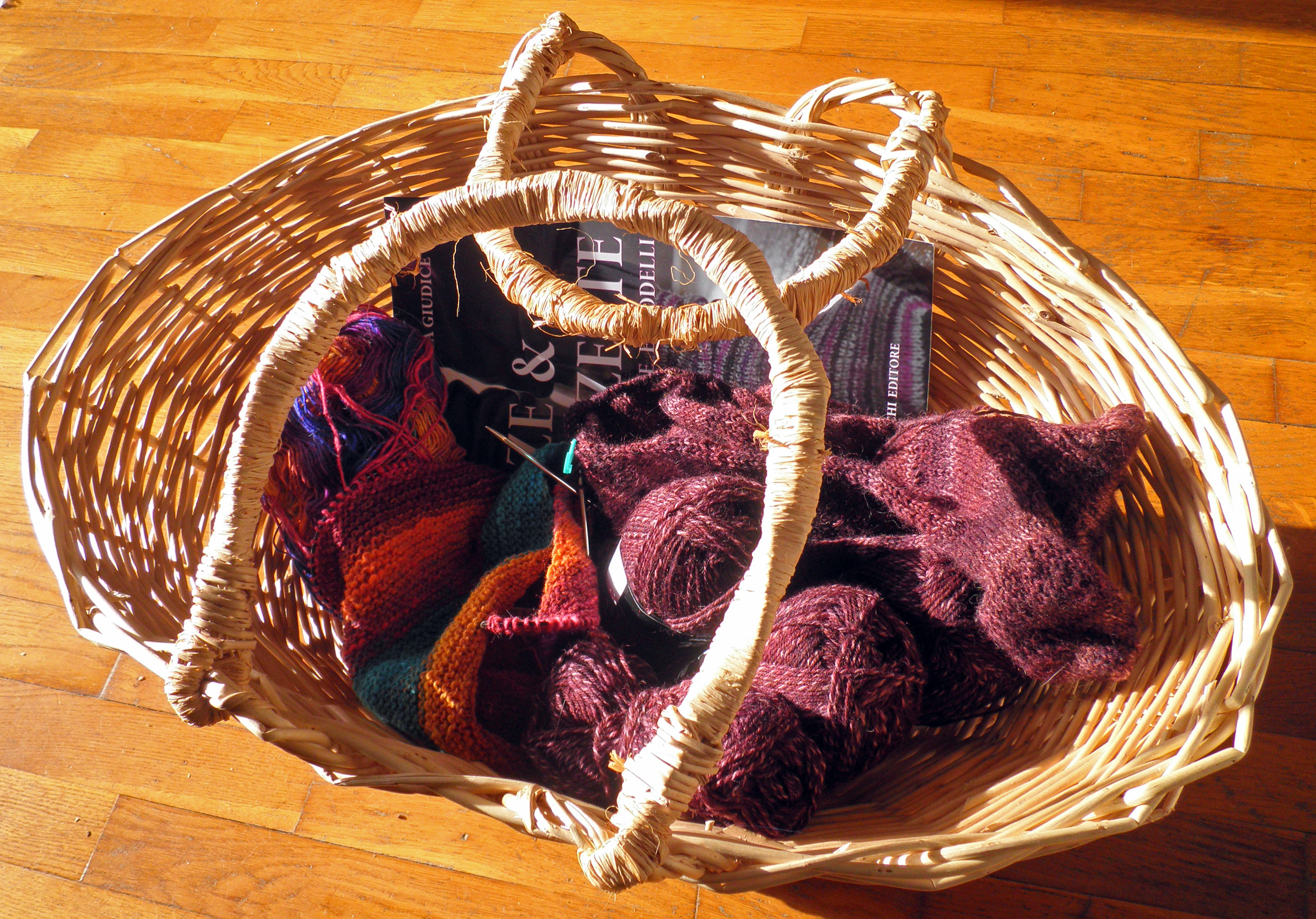 “Ulisse”: the trips (mental or not) of a basket