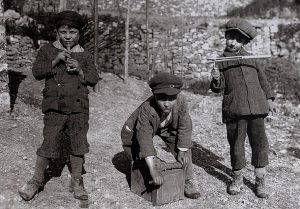 Your grandfather has ever made fun of saying that you are a “zerre-zerre”? He wanted to say that you do a lot of noise but you are small and harmless. He was joking … In fact, this strange word has a respected history.

The “zerre-zerre” (or “tric-trac” or “cro-cro”) is a traditional musical instrument classified as idiophone (that is, the sound is produced by the vibration of the instrument itself). In Italian it is called “battola”, “troccola” or “raganella” probably because its sound resembles the eponymous animal into a sort of frog  whose scientific name is Hyla. 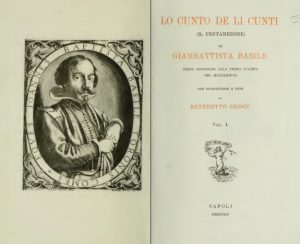 The abundance of names is conformed also for foreign languages: in English is called “cog rattle”, “ratchet” or “noisemaker”, in Spanish “matraca” or “carraca”.

The raganella “consists of a rod with a toothed wheel which, shaking and turning it, bumps into a tongue and produces a sound. ” So it describes all the 800 the philosopher Benedetto Croce, in his comments Pentamerone, collecting bells fables written by Giambattista Basile in 1600 (from which it was derived recently the award-winning film Tale of Tales by of Matteo Garrone). In Pentamerone gets nod to zerre-zerre along with other ancient folk instruments (the colascione, the chiucliero, the buttafuoco, the cacapensieri and zuche-zuche).

But its origin is very old: the Suda, Byzantine medieval encyclopedia, informs us that the raganella was invented by Archytas of Tarentum (fourth century B.C., at right). It is a politician, philosopher and scientist of the Pythagorean school, as well as the inventor of a kind of compressed air mechanical dove: the first “drone” of history.

The philosopher Aristotle in “Politics”, recommends the use of the raganella to the children: either as initiation into music, and because “toying with it, they do not break anything in the house, because the young man can not sit still”! 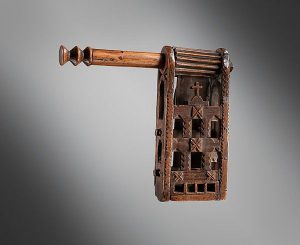 Over the centuries this tool was used throughout Europe in the folk parties, to announce the hours or give alarms. Until Vatican II the big raganelle called “rattlesnakes” (crotali) or “rattles” (crepitacoli) were used in the church during Holy Week instead of bells that were tied (photos and videos of old specimens and regional variations here).

In the Jewish tradition the gragger or ra’ashan (opposite) is used during the Purim to cover the sound of the name of persecutor Haman during the reading of the sacred text.

More secular its use as a tool to cheer: it is in this capacity in the App version of it can be glimpsed in this sees even in Harry Potter and the Half-Blood Prince. 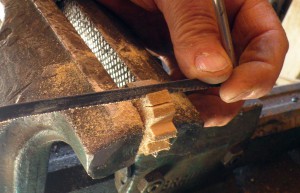 Formerly they used to recycle the spools of thread, which were made of wood and had to end two perforated discs. Alternatively you can use any of a few centimeters in diameter wooden disc, provided the wood isresistant (in the photo the foot of an old piece of furniture has been used). Make a hole in the center with the drill (or old with a hot iron on the fire). So you have to shape the teeth (you can help by drawing first on the surface, or by using a metal gear like marks form). It is not necessary that the teeth are sharp, even then you have to polish all the rough edges, because if affected can break and damage the instrument. 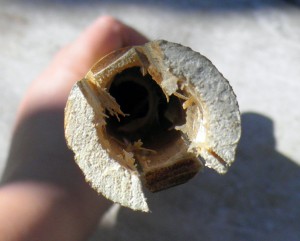 Attempts should be a robust barrel (not “green”), with a diameter suitable to contain the wheel (so about 3/4). At one end are to be practiced four cuts divided in this way: divide the circumference of the barrel into four equal parts and practice a pair of slightly longer cuts of the wheel (photo 1), and a pair of long cuts 10/15 cm (photo 2 ). They will form two cane strip: the little should also cut horizontally and removed, the greater is the area that beats on the wheel. 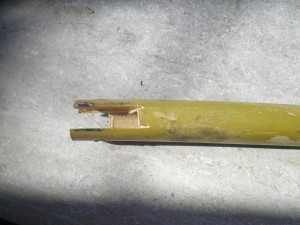 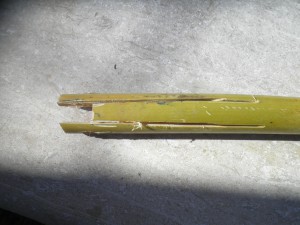 The two remaining parts of the circumference serve to accommodate the handle: they must be drilled with the drill a hole in each of them, about as large as that of the wheel. The holes should be parallel and not far from the edge of the barrel (about a third of the wheel diameter).

It should be a well dry and resistant stick, the diameter at will, provided that greater than that of the hole of the wheel. Bark one end until it becomes the size of the hole in the wheel should NOT ordinarily flow in easily, but with difficulty, so that the wheel remains locked there and do not turn around the stick. The stick must instead slide easily into the barrel hole. 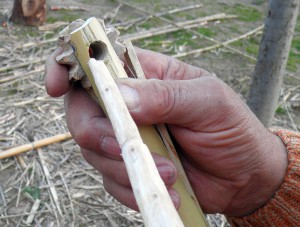 Place the wheel in the barrel so that the hole is aligned with the barrel hole, then let go of the pole tip and “ntorzarvi” (get stuck in force) the wheel. If you need, secure it with glue.

Grasp well the zerre-zerre from the handle and run, turning the forearm firmly in the opposite direction to thestrip of cane: the rod rotates around the wheel and the strip slam on the teeth, producing the typical pop. 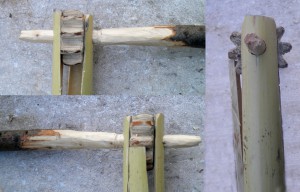 The Strange and Violent History of the Ordinary Grogger

How to make your own gragger

(Expanded edition of my article published on La Serra Gen-Feb-March 2015 under the heading “MAstreKEa.” This section deals with small and large machinery of corenese tradition, in the wake of the “Makers“: the makers and inventors that combine digital technology and new materials to the old tradition and the self-made and “mastrecheà.”) 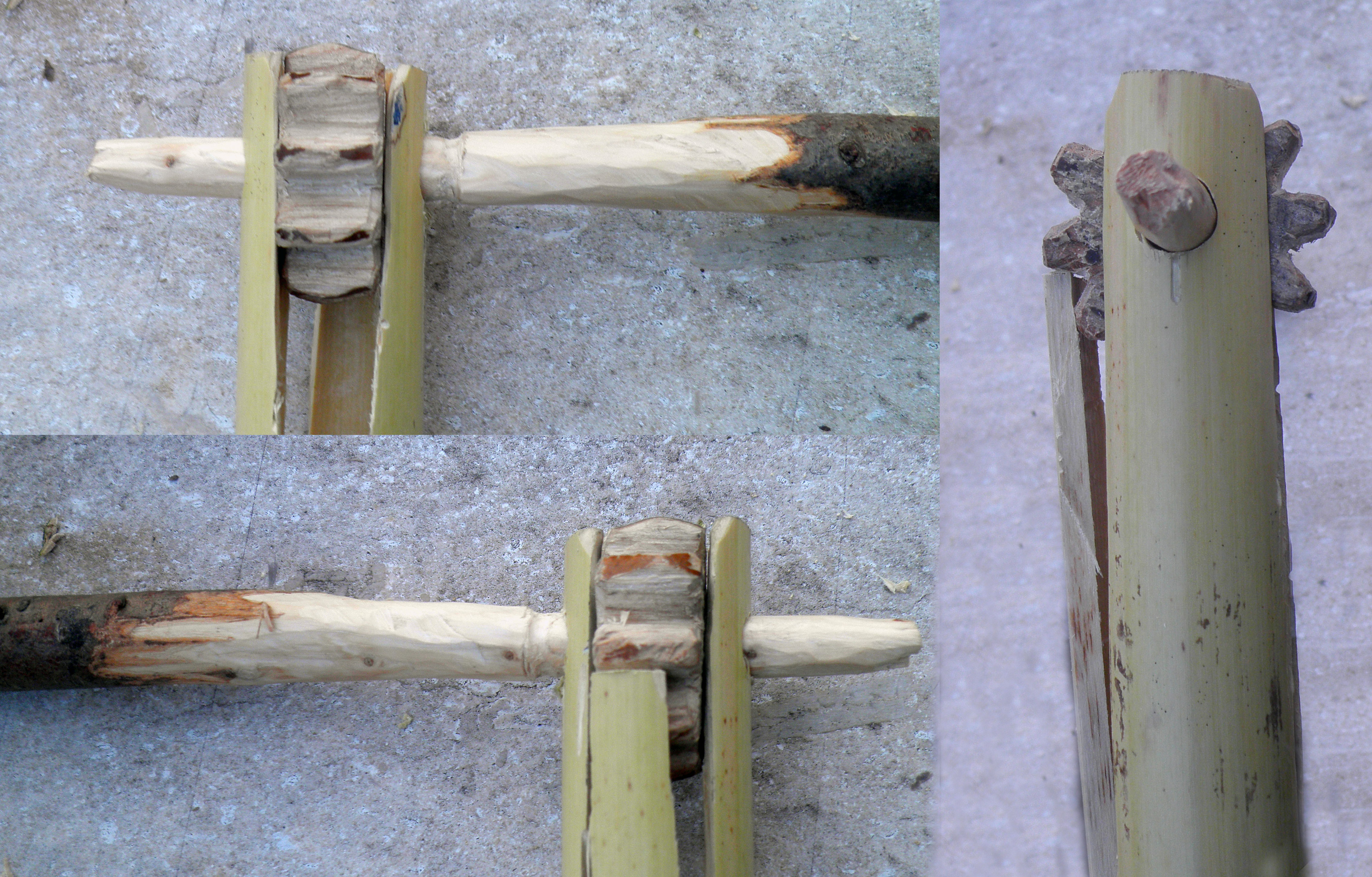